The Subculture of Street Racing & Its Impact on Others | Onlia

The Subculture of Street Racing & Its Impact on Others

We dive into the subculture of street racing and explore its effect on road users.

You're driving down the highway when suddenly, you’re boxed in by high-speed cars. Tricked out and tuned up, these beasts treat the road like their own playground, weaving in and out of the heavy traffic. Street racing and stunt driving can make the roads feel like a scene from the Fast and Furious films.

At the beginning of the COVID-19 pandemic, Toronto police reported an uptick of 35% in street racing and 200% in stunt driving. Car buffs have eschewed government-mandated social distancing in favour of car rallies, with one gathering over 1,000 fans in a small-town parking lot. All at a time when health, safety, and social distancing are required to keep us safe from COVID-19. We take a more in-depth look at this cultural car obsession, examining what it is all about, how it began, and where safety comes in.

To the uninitiated, stunt driving, which includes street racing, is an unsanctioned and illegal activity. Both around the world, as well as here, in Ontario, stunt driving culture is a thriving one, creating a community of drivers that use regular cars, enhanced with after-market upgrades. Pride of ownership is a hallmark of the driving and racing communities, featuring "cars decked out with L.E.D. lights, rims, tints, spoilers, and pounding sound-systems that represent the... massive street racing scene." Cars aren't the only vehicles people are illicitly joy-riding – motorcycles are also a fan favourite for illegal street races.

Racing typically occurs on quiet, uncrowded streets, either in the outskirts of a city or empty industrial complexes. Prime areas include those that aren't frequented by police, with planned events using radios and police scanners to evade law enforcement. Young men between the ages of 18 and 25 are the most common drivers at street racing events, highlighting the gendered divide of racing. Studies have found correlations between car modifications and the masculine identity, connecting pride to the act of showing off a modified car in rallies or races.

Still unfamiliar with the concept? Generally speaking, street racing and stunt driving are catchall terms for aggressive and unsafe driving behaviours. Ontario's Ministry of Transportation groups these behaviour sets together, outlawing any unsanctioned racing, driving contests, and stunts, in addition to things like weaving through traffic, blocking other vehicles, or driving too close to other cars, pedestrians, or objects. Hitting speed limits 50km/h or more over the posted limit is considered street racing by enforcement, subject to license suspension and roadside seizure.

The origins of street racing are varied, with some suggesting that it started in the 60s as a way to test out performance cars in the U.S. It isn't limited to North America, though – street racing and stunt driving ignite roads around the world. Recent coverage of the street racing scene in Vaughan, Ontario, suggests one theory that street racing may be a suburban solution to boredom. The city is one of the country's hottest racing spots, with races starting at stoplights when drivers offer a nod to initiate a race, flooring it once the light turns green.

Also feeding the obsession? The media. What we see in theatres, on television, or online may significantly impact our behaviours, researchers muse. The Fast and Furious film franchise has been criticized for influencing risky road behaviour, which correlates with limited study findings. In this, researchers compared speeding ticketing rates following the film's opening-weekend release, finding substantial increases in risky behaviour – double the average amount of speeding tickets were handed out, with speeds increasing by 20%.

While the connection between the film and ticketing isn't a robust and causal relationship, substantial increases in speed-related fatalities have police and safety advocates concerned. The film franchise's focus on illegal racing and high-speed pursuits now has many U.S. enforcement agencies regularly stepping up traffic patrols on opening weekends.

Not showing the harmful or dangerous side of risky driving is troubling, as it promotes an inaccurate depiction of street racing and stunt driving, potentially inspiring young and impressionable viewers (statistically young men) to try it themselves. Even if they aren't about to get behind the wheel, many videos feature bystanders standing too close to the action and putting themselves at risk. Depictions like this normalize the dangerous behaviour, rather than profiling potential risks.

What happens online translates into real life? Recently, empty roads became a COVID-19 casualty, with empty stretches of highway that were too tempting for street racers. Speeding tickets and roadside seizures have jumped since the beginning of the pandemic, with people taking the opportunity to speed up on the open roads. While roads are emptier, reducing the risk of collision with other vehicles, there is still great risk for losing control, colliding with roadside objects, or malfunction of the vehicle. 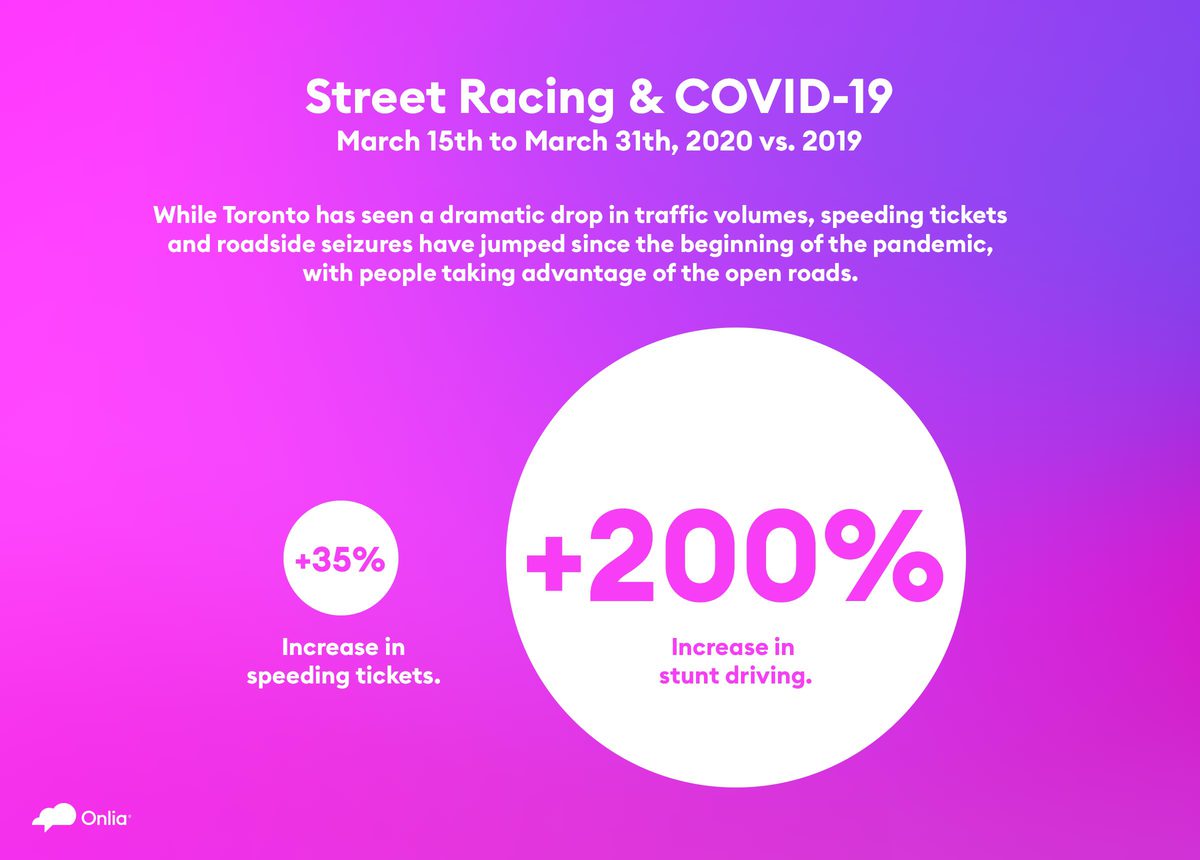 Modifications: Souping it up

While the speed and handling are part of the driving appeal, showmanship and pride of ownership are central tenets of car culture. When souping up a car – an apropos term derived from injecting racehorses with performance-enhancing drugs – the first consideration is to outfit it for "more power, less weight, [and] better handling." Lighter, aerodynamic cars with high horsepower are the goal for modifiers, who take stock cars (with car culture grouping into vehicle origin: Japanese, European, American), and tinker with any number of elements to improve performance:

Enhanced power outputs through the installation of after-market turbochargers or the use of nitrous oxide. Smooth out the exhaust, cool the amped-up system, and delete emissions. Maintain optimum traction with racing slicks or prep for off-road rallies with studded tires. Upgrade the light systems, or blackout your rear lights to go incognito. Secure better handling with lowered suspension, allowing for crazy turns while reducing the risk of rollovers.

All of these modifications, and more, can create the perfect speed machine – hundreds of message boards online detail the best way to squeak out a little more performance, a little better handling. The problem with a lot of these modifications is that they aren't legal, defying safety design or emissions protocols. Drivers defy enforcement with hidden modifications or falsify their emissions. Some evade the police with license plate covers, red light-fooling paint, laser jammers, and radar detectors. This cat and mouse game may intensify the adrenaline rush, but it also raises the stakes for injuries and fatalities.

While seemingly thrilling online and in theatres, there are real consequences to stunt driving and street racing. York Regional Police reminds drivers that "our roads are not video games." M.T.O. takes it further, sharing that the "risk of a fatality or serious injury is almost five times greater for vehicles crashing at 50 km/h or more above the posted limit on a highway with a posted limit of 100 km/h." 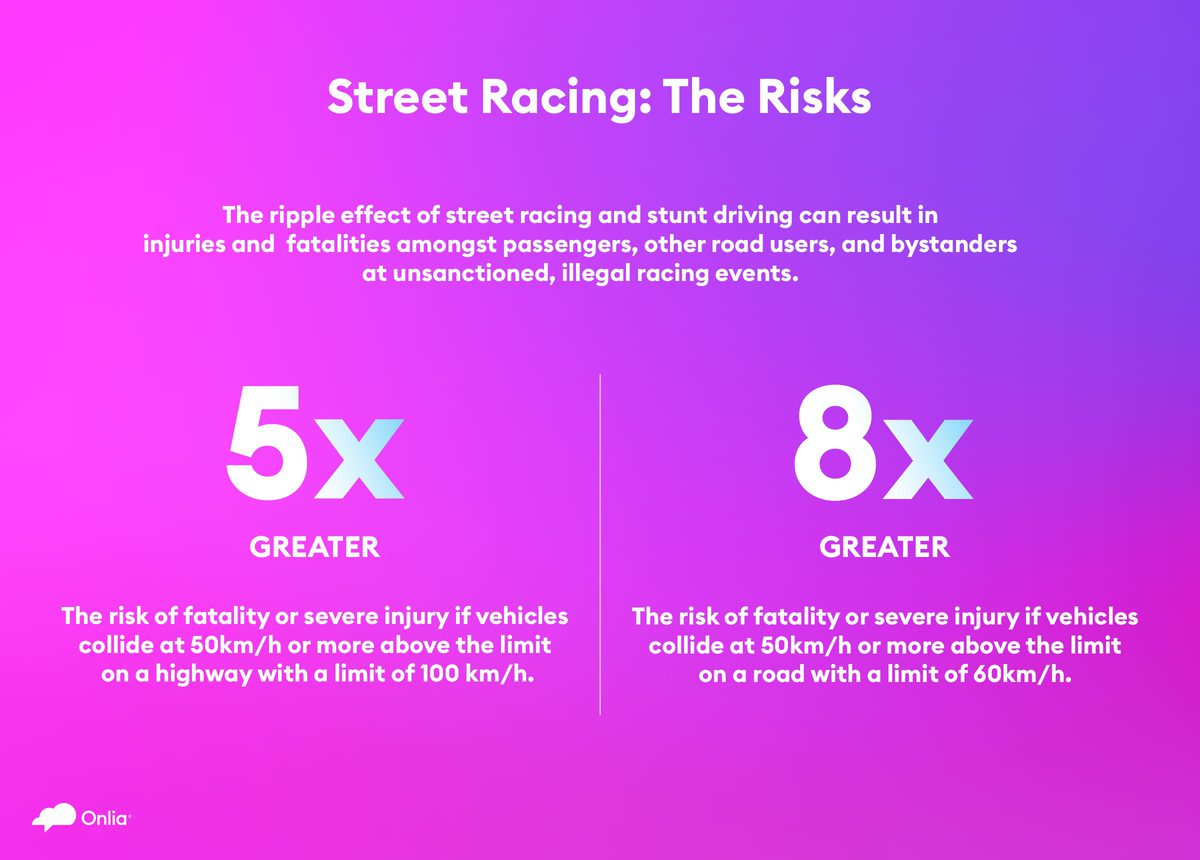 This risk only increases on roads with slower posted limits. The risk of fatality or severe injury is almost eight times greater if vehicles collide 50km/h over the limit on a road where the posted limit is 60km/h. While it may be apparent, researchers have confirmed that street racers face an exceptionally high crash risk, often egged on by the activity's competitive nature.

Drivers aren't the only ones in danger, either. The ripple effect of street racing and stunt driving can result in injuries and fatalities amongst passengers, other road users, and bystanders at unsanctioned, illegal racing events. Modifications to vehicles pose additional safety concerns, as the user may install some illegal modifications. Power-enhancing modifications may be too much for the car to handle, while the use of improper tires may increase collision risk.

The risks associated with street racing and stunt driving are severe and increase the strain on the  enforcement and healthcare systems. Some drivers recognize the risky nature of what they are doing, installing racing seats and five-point harnesses in case of a collision. Others follow loose safety rules for racing routes. They won't drive by a school or neighbourhood and stay off busy roadways – but this isn't a universal behaviour. Some drivers chose to use rush hour traffic as their personal track, weaving in and out of commuter cars as though they were traffic cones.

Extreme driving and the law

Enforcement and government agencies have been trying to tackle the issue for years through various tactics. Ontario's street racing laws, enacted in 2007, defined an upper limit for speeding, suspending the license and seizing the vehicle at the roadside for anyone going 50km/h or more over the posted speed limit.

Municipalities have been working to identify modified vehicles, posting roadside checkpoints outside known areas for racing – one previous racer reported over $30,000 in fines for modifications that contravene the Highway Traffic Act. While not all modifications are illegal, cars remain an easy target for the police, as vehicle enhancements can be less than subtle featuring bright paint, under-mount lights, tinted windows, and loud mufflers.

Requiring a more comprehensive strategy, Project E.R.A.S.E. (Eliminate Racing Activity on Streets Everywhere) was born in 1999. An annual campaign, Project E.R.A.S.E. mobilizes 22 Ontario police services as well as the Ministries of Transportation and the Environment, to identify and stop illegal street racing. The coordinated campaign typically launches every summer, using ground and air tactics to find race sites where drivers can be found racing at speeds up to 300km/h.

Where do we go from here?

Street racing and stunt driving is not a trend that will die out anytime soon. Message boards and online forums coupled with thrilling movie chase scenes and social media content serve to ignite more car-obsessed fans, ensuring that street racing and stunt driving continue, while also raising some questions about ethics. As we consume more information online, where does the responsibility lie in informing on safety? Furthermore, how can we filter for real and safe content versus videos that are produced, edited, and unsafe?

For the more immediate solutions, some point to legal racing on local speedway tracks, but identify them as cost-prohibitive for many – a hard sell against the overpowering allure of free racing on the streets. If drivers did want to use their own car, regular vehicle insurance might not provide coverage. For others, advanced driver training may satisfy the need for speed, allowing practice at higher velocities while trying out skids, practicing defensive driving, and other handling maneuvers.

Driver education may be the earliest way to inform new drivers about the risks, researchers point out. Thrill-seeking patterns paired with risky driving behaviours are not often covered in typical graduated licensing training. By introducing the issue and discussing it early, new drivers would be more informed of risks and hazards.

Regulation and enforcement provide the tools to track and fine offenders appropriately, while coordinated strategies – like Project E.R.A.S.E. – focus resources. Ontario’s street racing legislation as well as other aggressive driving laws provide a mechanism to convict dangerous drivers. However, there is more work to be done in the enforcement realm, as some drivers still find ways to drive even after receiving countless lifetime driving bans.

For those sharing the road with speedsters, it reinforces the need to stay focused, calm, and in control, even when your commute home starts to feel like the opening laps of a Formula One race. At higher speeds, things happen quickly – you need to be confident you can react just as fast.
LIKE THIS ARTICLE?

How to Keep Your Home Germ-Free

Fire Safety in the Kitchen

Are Your Brakes Making You Sick?